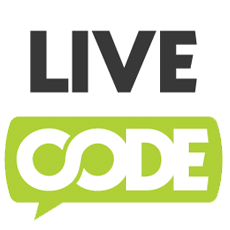 * LiveCode is a truly multi-platform programming tool with iOS, Android, Mac, Windows, Linux, Server & HTML5 deployment options. * In LiveCode your application is always running. You can add objects or change the code and instantly see the effect. No other language does this. Editing live applications creates a powerful workflow, so you can build your apps faster and more easily than ever. Simply toggle between ‘run’ and ‘edit’ mode. * LiveCode is cross platform so you won’t have to write extra code for each platform you deploy to. This avoids having to write your app multiple times for multiple platforms saving you crucial developer time. * The LiveCode language is designed to be expressive, readable, memorable and as close as possible to the way you speak and think. That means you write up to 90% less code compared to traditional languages. * LiveCode comes with a fantastic selection of controls and libraries but if they aren’t enough, you can download and install extensions created by members of the LiveCode community and third-party vendors.

Livecode is a high-level programming language that can be used to create games although it is not the only purpose of it. Livecode is an open source project although there is also a proprietary version of Livecode which is a retail product. Livecode started in 1993 with the name of Revolution Programming Language and many things have changed since then. It is a part of the xTalk scripting languages and was heavily influenced by Hypertalk. Even though it is not a SDK, it is a scripting language that we would love to see in many of them.

First of all, Livecode runs on almost any computer platform like Windows, OS X, iOS, Android, Raspberry and Android. By using a compile-free workflow you don’t need a different code to run it in different devices or platforms. This is very similar to the way SDKs work because when you have made some code with Livecode you are creating it for different platforms and not just for one, saving you a lot of time in porting from one to the other. It also runs in most of computer OS with the same syntax so you don’t need to use different languages or syntaxes if you are programming in several computers with a different OS.

Livecode is open source and you can find many places online to download it for free but there is also a paid Livecode project that gives us a lot of advantages. The first one is a visual development environment that will make our life much easier. Actually Livecode is a very easy to learn programming language, but if it has a visual environment it makes it much easier. 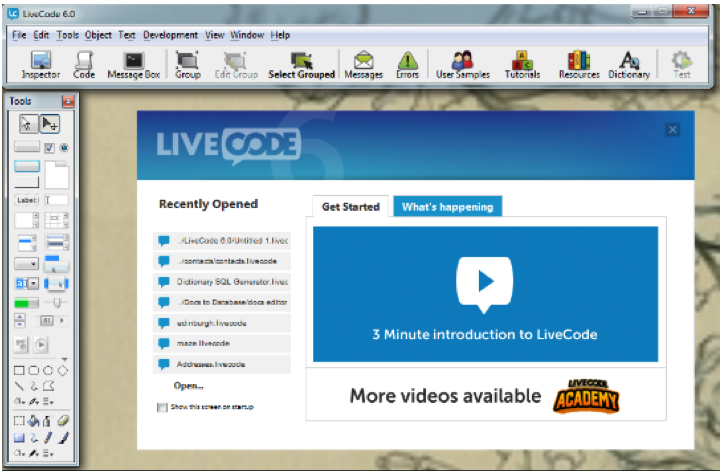 With this environment, programming is not as dull as it is to type in a boring text editor. You can drag and drop many options to your app and the most used commands are ready to use. There is also a nice toolbar with many options for you to use and most importantly there is also an Inspector to check for your syntax errors. For example, you can drag any control from the palette and then customize it at will, without needing to type boring code.

Live editing is something we have seen in SDKs before but Livecode is the only programming language so far that does this. You can edit your app as it runs. Yes, as cool as it sounds. You run your app and let it work so you check what is it doing at the moment and in the meanwhile you can tinker with its code and see the changes on the fly. This is a very powerful tool that generates a dynamic workflow, much faster than the usual way of coding.

But if there is something we really love about Livecode is its syntax. It is so simple and intuitive that sometimes it is not necessary to explain what is doing each line of code. Many programming languages have a difficult syntax that sometimes is not intuitive at all and reviewing a chunk of code is not pleasant to the eye. Furthermore, somebody who is not familiar with the code won’t know what is doing each of the commands. That doesn’t happen with Livecode, because the vast majority of the commands are so intuitive that even with no experience in programming, you will know what is all about.

For example, our beloved Hello World program. We can put it like this:

The first line says to repeat the command 10 times. Did it really need an explanation? The second one will put the words “Hello world at” and then the time. The third line will make the timer wait 1 second and the fourth one will end the repeating loop. See? Can’t be more intuitive, sometimes when you are programming in Livecode looks like you are just entering the orders you want the computer to do. But Livecode is not only useful for petty programs like the Hello World one.

For example, if you wanted to upload a file to an FTP server, it is usually quite a messy task to do with programming languages. With Livecode you just type:

And will put the picture.jpg file into the ftp. Really easy and intuitive. As you can see, the word “put” is used for many tasks in Livecode, probably because programming usually is about putting data from one place into another.

But if you have not enough functions in Livecode you can also download many libraries available on the internet or you can make your own ones in C# (although C is not as fun as Livecode). Since it is an open source project, there is a huge community on it and they are used to help for free. Yes, for free.

If you are not a programmer but you want to learn to code, Livecode is a great option for starters. It is very intuitive and will let you learn syntax in a way you won’t be able in any other programming language. The visual environment makes it even easier to do what you want to do without having to type code. Since it is open source the community around Livecode is very gentle and warm and will help you in any doubts you may have when you are starting your adventure as a programmer. Completely recommended not only for starters, also for experts because it is a powerful language itself and the limits it has can be surpassed by creating libraries on C#.