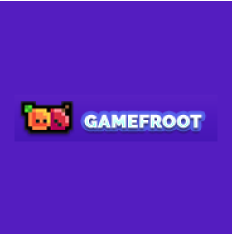 Gamefroot is an ideal platform to develop, test and publish educational games. Gamefroot is designed to be efficient, comprehensive and straight forward enough to be used by schools to teach basic skills in programming and code. Pro users have access to a range of illustrated learning materials and hand outs. in addition can add copy protection to their games to stop other Gamefroot members from copying their games.

GameFroot is an HTML5 based game creation tool that allows anyone to make their own 2D platform or RPG games even without any coding experience. It was created by a New Zealand based company GameLab Limited as a way to democratize game development and introduce children to the basics of the process.

This tool is very popular with teachers and educators. Mainly due to the fact that it’s free and it has an easy to use interface that allows educators to teach programming and game design all in one tool. In fact, their website and tutorials claim that by using their tool, anyone can build a simple platform game in less than 5 minutes.

What are the features of GameFroot?

The one thing this tool has in common with other game development tools in the market today like Unity or GameSalad is its drag and drop interface. You just put in all the elements you need in their visual editor, which looks a lot like a simplified version of Photoshop. 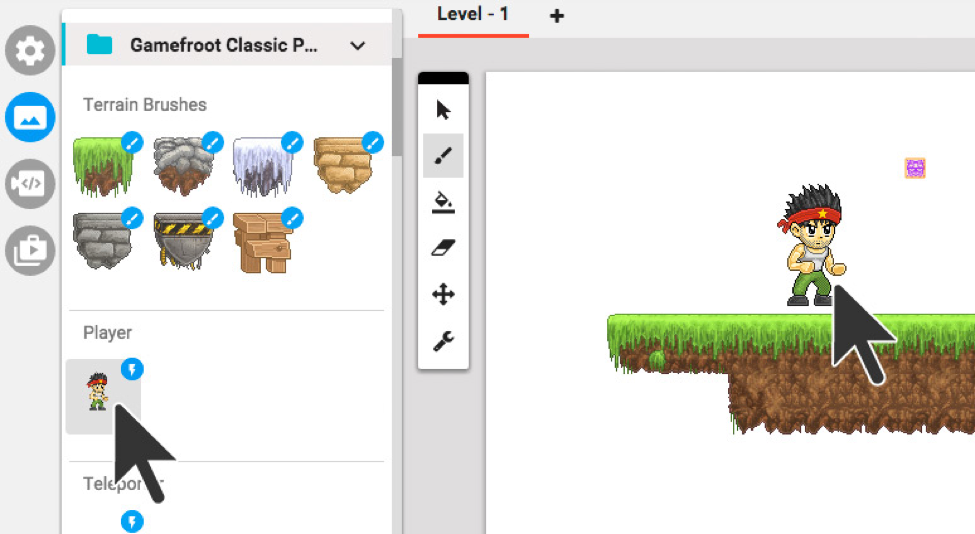 One of the things that makes GameFroot stand out from those tools is that it makes the process even simpler. There are templates, pre-design, customizable character sprites and pre-defined game elements already available. You can create your own elements and upload them to the category they belong to or you can download more elements from the GameFroot site for a fee. 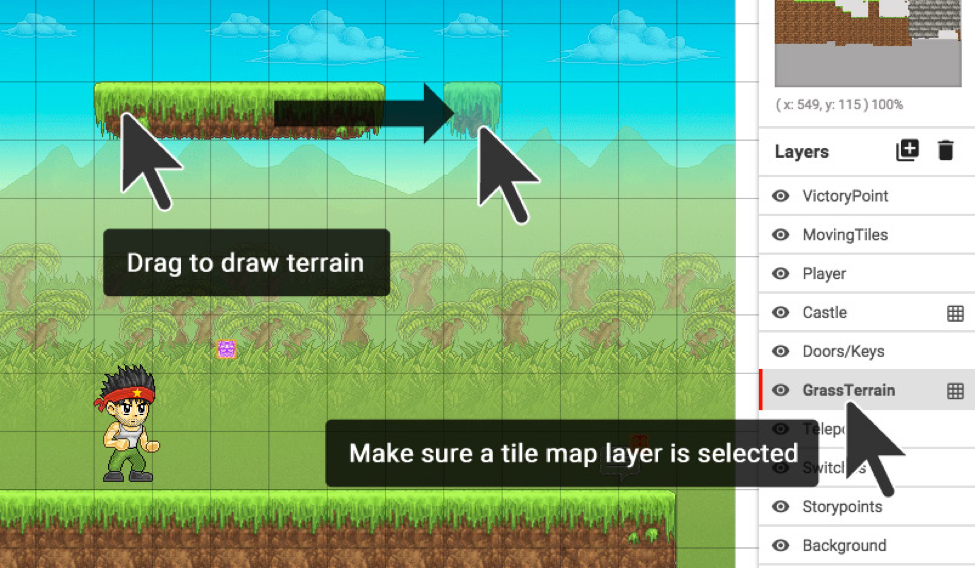 The game is built using layers, with each element corresponding to a specific layer. Depending on what layer you’re working on, you can define game actions and do some sprite styling within the visual editor (character creator). 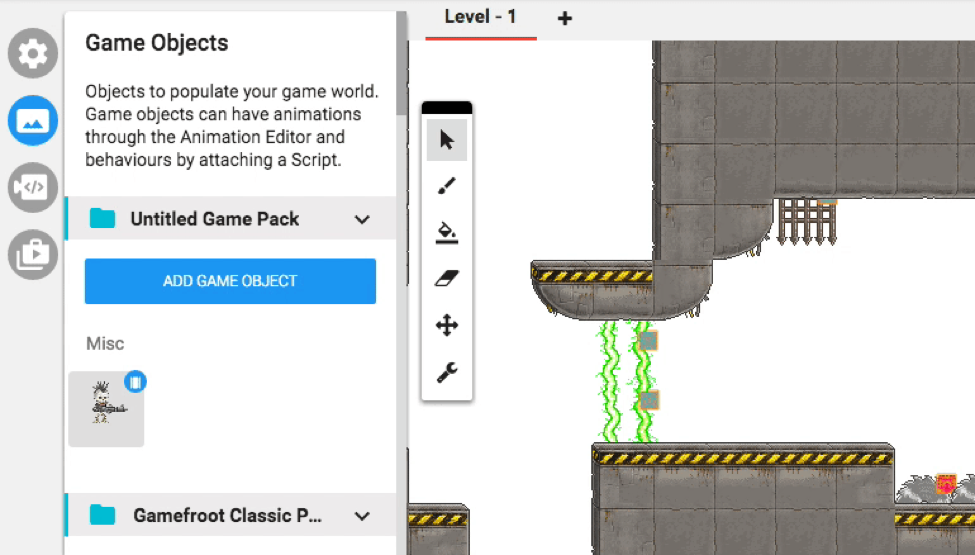 GameFroot also comes with a scratch-like script editor powered by Google Blockly that allows users to create basic programs and introduce game actions to their game characters like text, physics, etc. The blocks are organized into categories and each category corresponds to an action an element can take, like responding to game controls or printing text. You put together a series of scripts to create a program and assign it to the element through the visual editor.

Once you’re done building your game, you can share and play the game on your browser or through your mobile device through the GameFroot app. GameFroot provides support if you want to publish your game directly on iTunes once you subscribe to their pro account.

What are the advantages of using GameFroot?

The great thing about GameFroot is that you don’t need to download anything. Everything is done on the browser. And once you have access to your tool on your profile, you also have access to all the templates and elements available in their library. This makes it really easy for non-developers and designers to start learning the tool and all its features.

To add more Script editor is a great tool to teach children the basics of game programming. The preconfigured actions makes it easier and faster for anyone to define the game play and how each character goes through the level. The graphical script editor makes it less likely to make mistakes since all you need to do is drag, drop and connect the commands that you want.

Another great thing about GameFroot is its enthusiastic community of educators and students who are really encouraging people to use the tool and help them out through the process. They also support copy protection for the games you build within the tool, which would further encourage young game developers to work on their games without being afraid that their game ideas might get stolen.

What are the disadvantage of using GameFroot?

The first thing you’ll probably notice is that GameFroot can be slow. The bigger your game becomes and the more elements you introduce, the slower the app becomes. This isn’t an issue if you’re a kid building a simple 5 level platform game. It’s a big problem if you want to introduce a lot of elements with numerous scripts and a wide variety of levels.

It’s also a bit disturbing that they haven’t done any updates in the past few years. Maybe it would have been understandable for this site to be somewhat slow back in 2013. But with most browsers now supporting HTML5, this shouldn’t be an issue anymore.

Another disadvantage I accidentally discovered is that GameFroot isn’t optimized for touchscreens. This is sad because their child-friendly interface makes it ideal for kids to use their visual and script editor to devices like tablets and smartphones.

And if you look at the script editor, you’ll see that customization isn’t possible. You only have a limited set of preconfigured behavior available and these scripts are self-contained. It doesn’t call out procedures related to other character or environment. I understand that this was intentionally done to simplify the programming language, especially for children and beginners. But for serious game developers, it severely limits how different game elements can interact with one another.

Looking at GameFroot objectively, we can all see that it’s really going to be a tool that game developers are going to go to when they need to build something quick an easy. This app has great aspirations, but it’s simply too bulky, too limited, and too slow to use to build a really great 2D platform games.

It’s mainly a teaching tool and a great one at that. Their visual interface is very intuitive and their script editor is really engaging. If you want to start your kid early into game development, GameFroot is a wonderful tool. If you want to give them a taste of what it’s like to publish their own games, or be part of a game developer community of their peers, paying for the pro subscription might be worth it. But as a tool for freelance and professional game developers, you’ll be better off using GameSalad or even Stencyl.