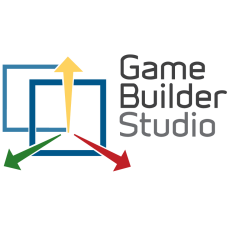 register to the site

GameBuilder Studio is an open source application that allows you to create cross platform 2D games without writing a single line of code. It makes use of a Photoshop like interface which allows you to drag and drop the elements of your game and assign game actions to these elements. This is a great tool for anyone well versed in Flash or Photoshop as the interface works a lot like most image editing tools but with more functionality.

GameBuilder allows people without any coding experience to create sophisticated 2D games because of how the software is designed. It’s basically a multi-layered tool where the user works on the top visual interface and the pre-defined actions are built in the generated code layer. The user drags and drops the elements he needs and assigns various values/actions that are provided. It leverages technologies like Adobe Air, Starling, Feathers and Native Device Extensions to give users control over the visual elements of their game. GameBuilder also has an animation system, Spine, which gives character sprites realistic movements.

The user can still customize the game further by introducing a custom codebase layer. The custom codebase allows you to introduce custom UI networking code to the underlying generated AS3 project, which can help introduce more visual and functional elements in the game. This can be done by downloading GameBuilder software code from their GitHub Page.

Users can work with the visual editor or code view. And once the game is completed, the code is output to XML and can be deployed on multiple platforms like iOS, Android, Browser via flash, and now the Ouya console.

How does GameBuilder Studio work?

You can do all this with the free option, which gives you access to basic features, allows you to create web and flash games, and 1 click play testing. With the paid options, Pro and Pro Plus, you get a range of other options such as multiplayer capability, in game purchasing, free plugins, advanced tech support, and support for ad networks.

One of the games the developers at GameBuilder Studio recommends that users start with in order to learn how to use their software is to recreate ‘Flappy Bird’. They have a 4-part video tutorial series on YouTube that shows how easy you can build a similar game without any coding and have the entire game up and running in less than an hour.

The first thing you need to do is to upload all the visual elements you need to create the game, background, sprites, text, etc. Once you have everything in your library, you can start building. 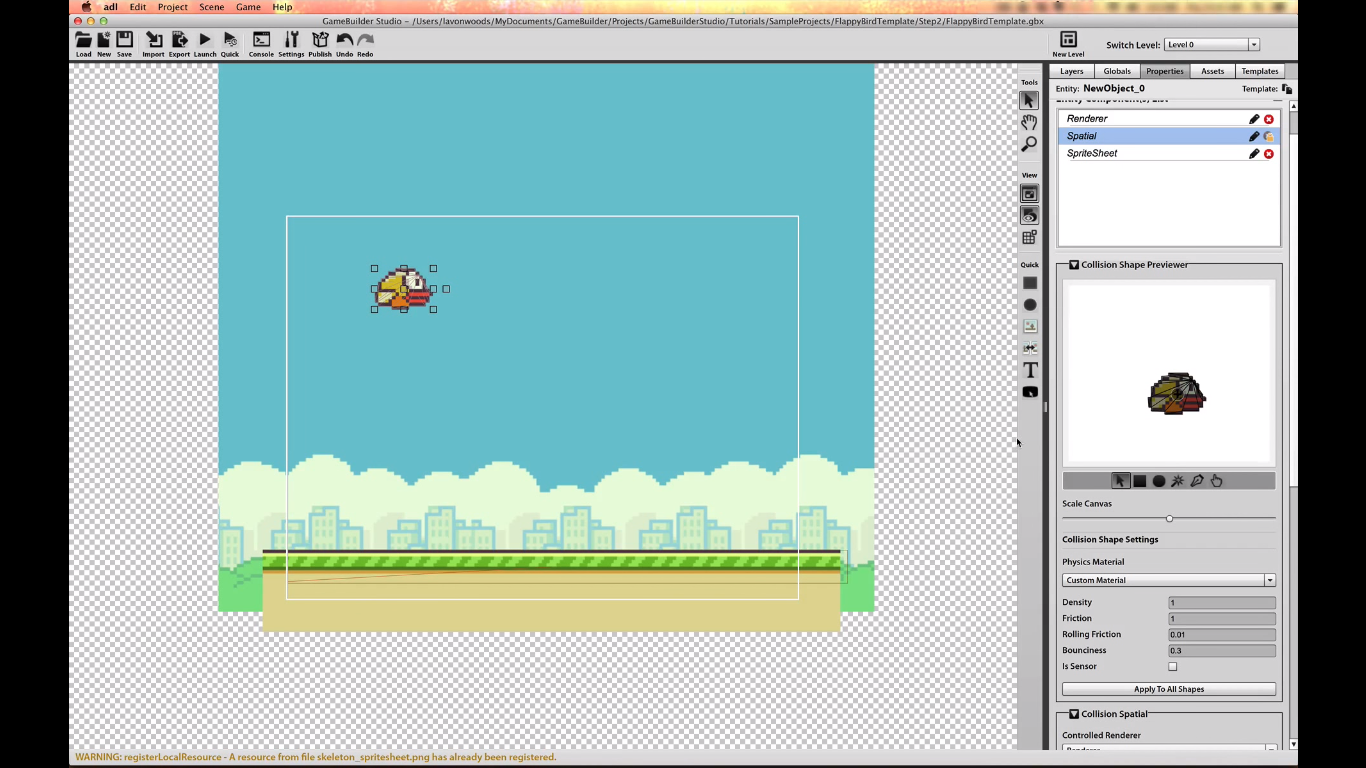 Flappy Bird is basically a collision game. Here, you can program the physics of collision to the element, defining how the element would look and react once it collides with another element. You can set parameters like density, friction, and bounciness; and you can see how all of this would look as you style and render each element. 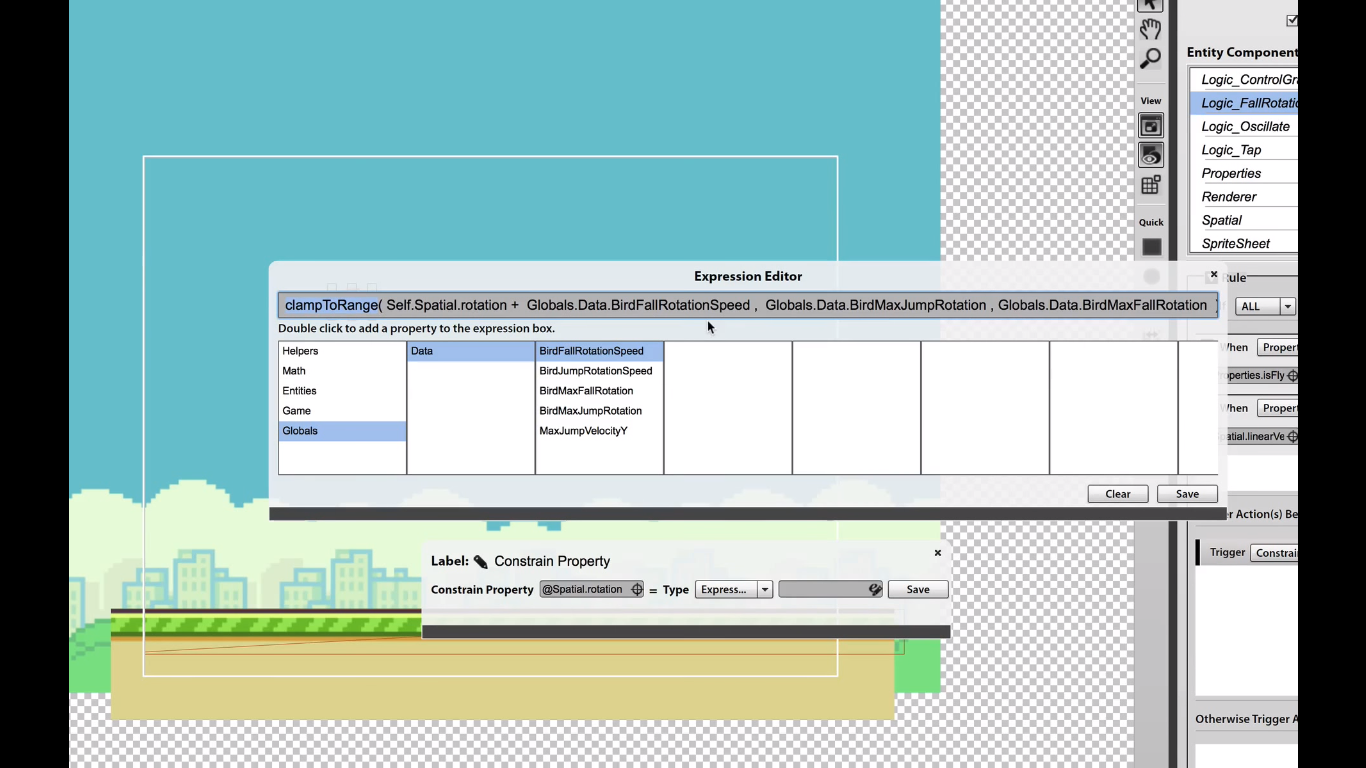 You can also assign other game actions to each element. In this case, once the bird collides with the barrier, you can assign it to fall or jump. You can define the speed, reaction, rotation by setting the parameters. 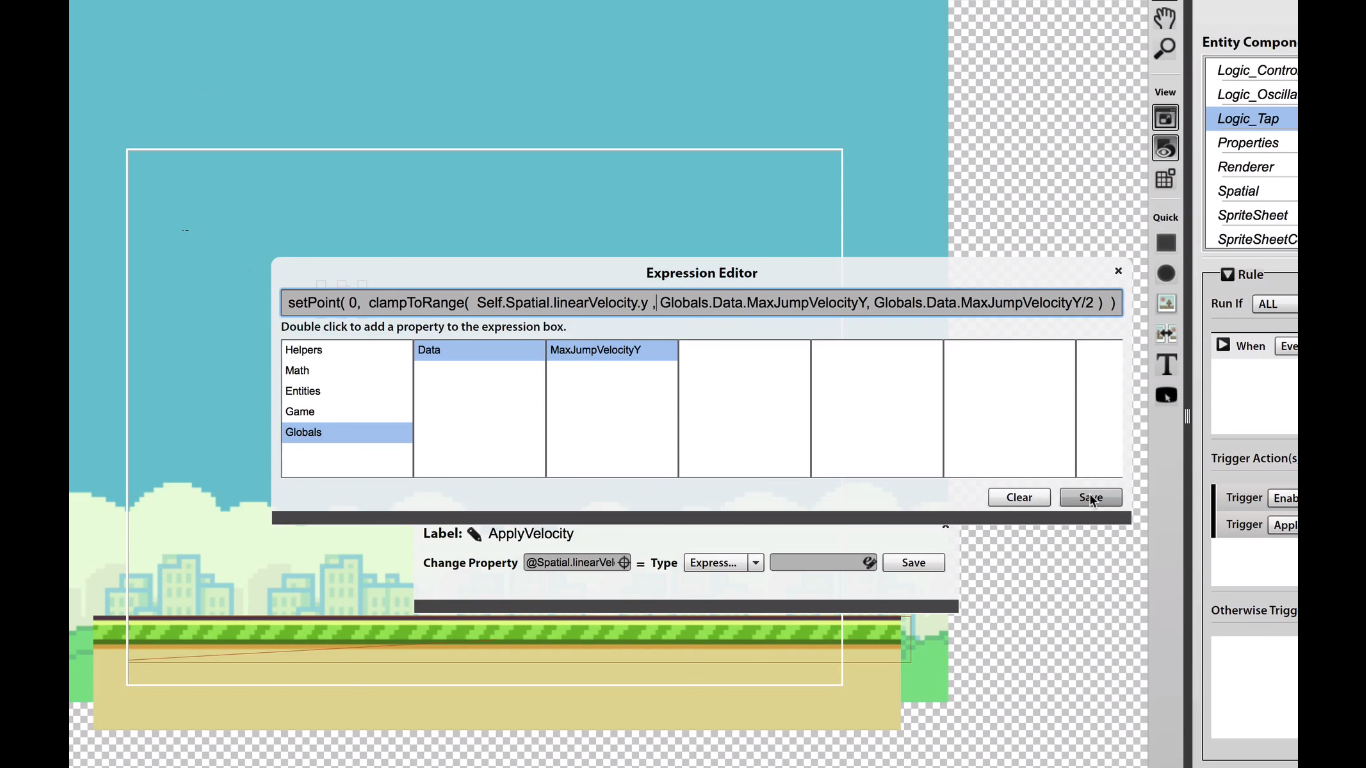 Then, you can define what action the element should take when a tap action is registered. Here, the jump height and velocity of the element can be set. As you can see, you can change these parameters depending on how want the element to react. You can save and rename these sequences to make it easier to remember and call on these components for other elements within the game. 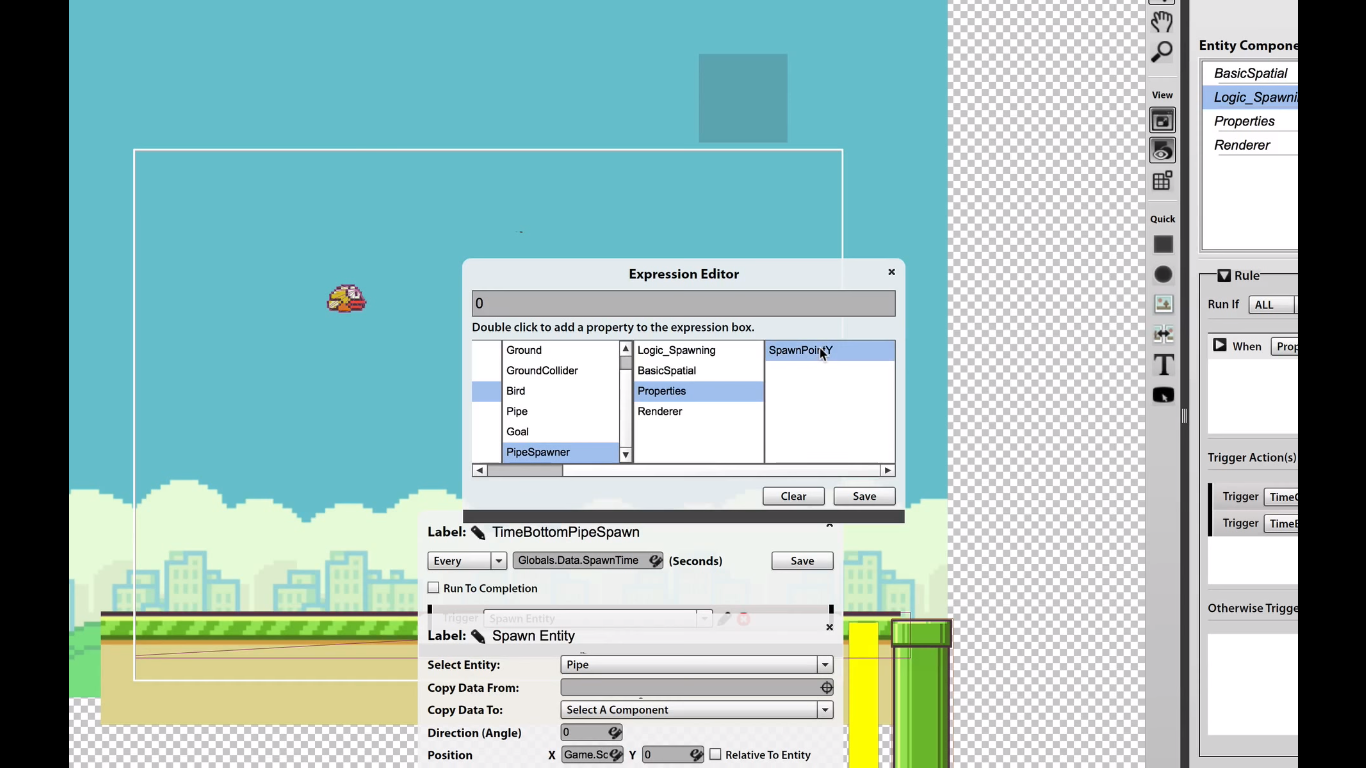 Here, the element being defined is the obstacle—the pipes the bird would collide into as it flies through the course. Again, we’re just assigning actions to the visual elements and not doing any programming. How often, how high, and how far apart the pipes would appear are just set within the software. 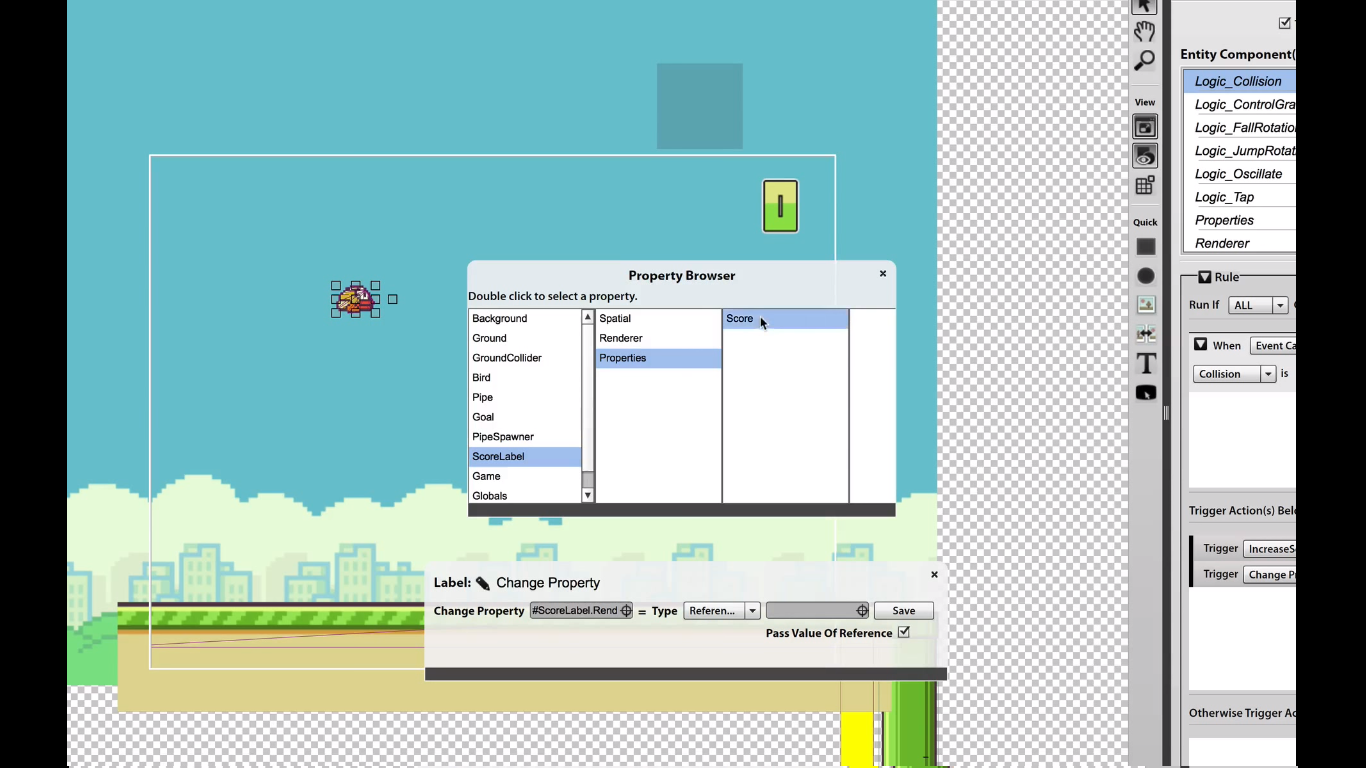 Once you have defined your game actions, you can start programming your scoring system based on the entity components that you have defined earlier. Using your uploaded text, you can have your score appear on the screen as the game progresses. 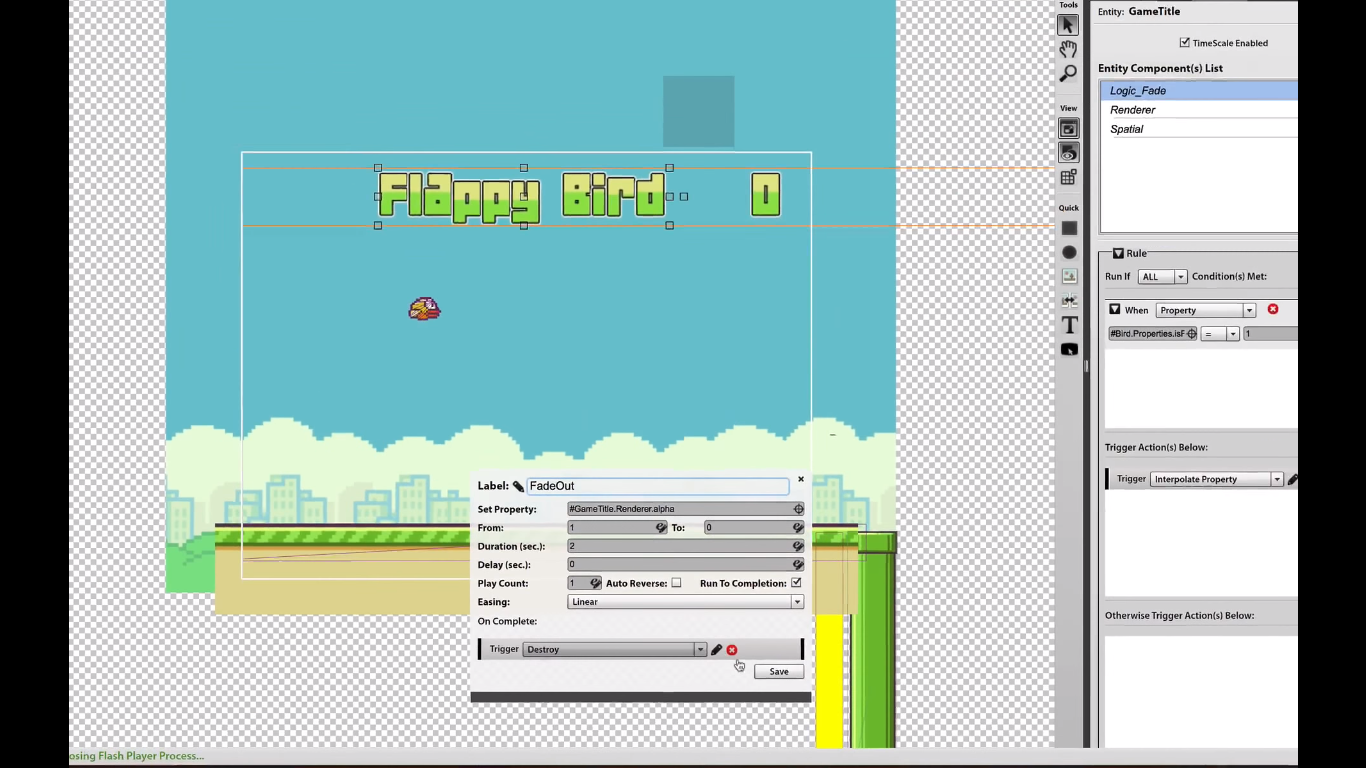 Once you have most of the active visual elements defined and programmed, you can start defining other elements like the background layers, title and music. 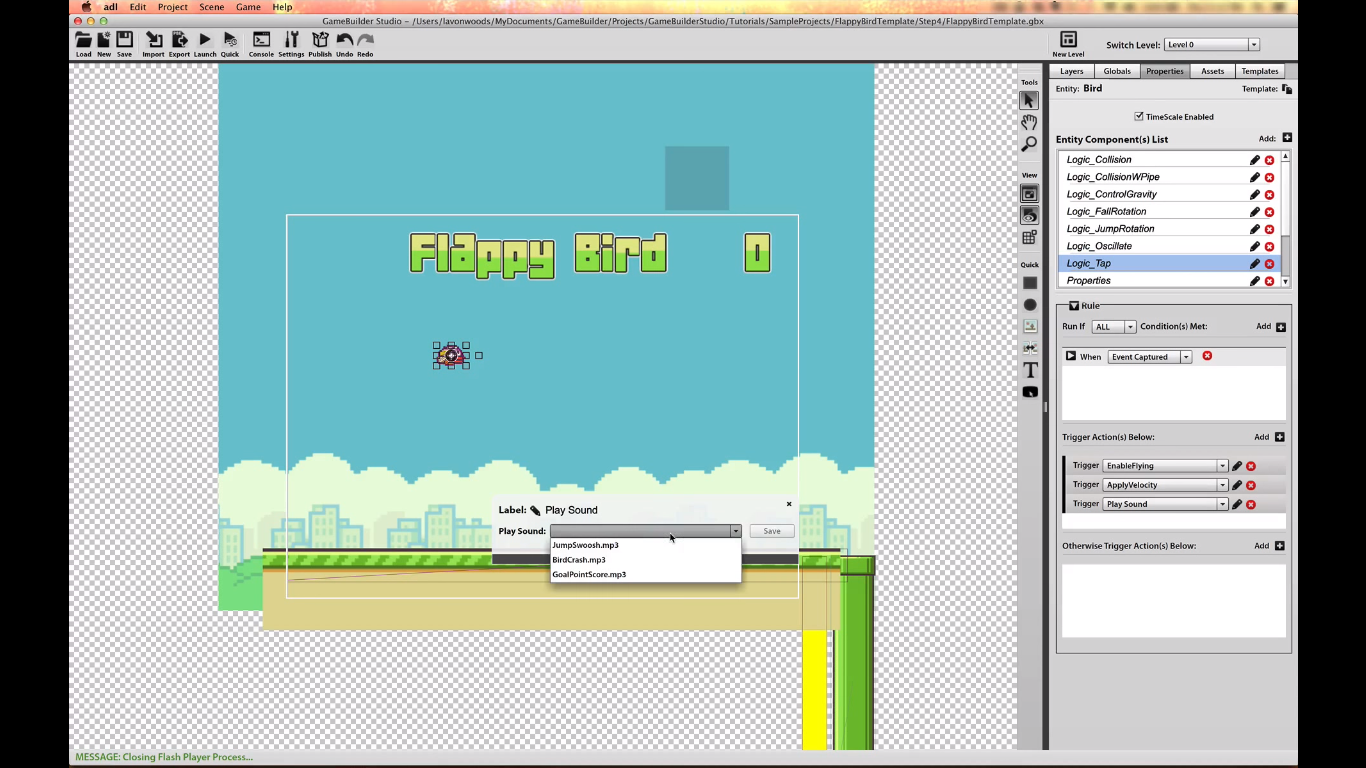 In addition to the Flappy Bird Tutorial, GameBuilder studio also came up with a tutorial for their iPad game, ‘Hungry Hero’. Their YouTube channel also has other tutorials that showcase the different features of what the software can do.

What are the advantages of using GameBuilder Studio?

If you plan to build simple 2D games, using a tool like GameBuilder is definitely an advantage. It makes the process faster because you don’t have to code and you only have to build once. You don’t have to program in standard game actions and you can just focus on the design and gameplay. It also helps that they have comprehensive videos available online which practically gives users a step by step guide on how they can also create their own games.

The open source nature of GameBuilder studio also gives developers some flexibility and freedom. You can introduce your own plugins, define your own UI, and introduce actions that you use often.

What are the disadvantages of using GameBuilder Studio?

One main disadvantage of GameBuilder Studio is for some reason, until now, the software is still in beta. Yes, they have introduced a lot of fixes in the latest version released this year that answered a lot of the issues but there hasn’t been a lot of activity within the community, which has greatly stunted this tool’s growth. Plus, it took almost 2 years for the latest version to be released, which is too long. And the fact that they haven’t released any new videos, blog posts, documentation or updates in their GitHub makes you wonder if the people behind Game Builder Studio still cares and if the users will still have the support they need in the future.

On the surface, GameBuilder Studio is promising and in many ways, it does deliver on its promise of democratizing the game development process. It’s not something everyone can use but it does allow creatives to have a bigger share in game development. It can’t produce complex and visually challenging games that most creatives would aspire to. It can also help educate designers on the basics of game programming and helps open more opportunities for innovative 2D game design.

GameBuilder Studio does minimize the need for a developer in this situation. But it can’t completely eliminate it. Innovative gameplay requires innovative solutions. GameBuilder Studio is a good start and if the developers behind it can sustain it, it has the potential to achieve more in the future.